A camp stove doesn’t have to be complicated to be great. It should cook food and boil water quickly, be rugged enough to withstand travel in the back of a car, and not require a burdensome amount of fuel. After researching 26 camp stoves, testing 13, and dissecting three of them—down to the welded copper tubing and soldered burner plates—we discovered that the Coleman Classic Propane Stove is exactly that: uncomplicated yet great.

This straightforward, rugged stove cooks food quickly and evenly. And it’s less than half the price of other stoves we tested.

The most important feature of the Coleman Classic Propane Stove is that, despite getting tossed in and out of our cars repeatedly, it continued to work perfectly. We also appreciated its versatility: The Coleman boiled water faster than any stove we tested (except our upgrade pick, the Camp Chef Mountaineer), yet when turned down low, it was gentle enough to griddle golden-brown pancakes. On a single 16-ounce tank of propane, this stove can cook with both burners on high for roughly an hour, and it has the barest minimum of parts, so it’s easy to maintain. The Coleman does not have a piezo ignitor (that little red button on a lot of stoves, including the Camp Chef Mountaineer, that lights the gas), so you’ll need to bring a lighter. To us, this just means there’s one less thing to break (and if you’re paying less than $150 for a stove, these piezo igniters will almost always break).

Due to its solid construction, this stove is heavier to carry than the Coleman. But the Mountaineer also has a more-powerful output, so you can cook on it like it’s your home stove.

The heavy-gauge, all-aluminum Camp Chef Mountaineer is built like the tough, classic camping equipment you hear only salty old-timers or vintage equipment nerds talk about. It’s nearly eight times the price of the Coleman, but if you’re comfortable with the jump in cost, the Mountaineer is worth it. At just over 16 pounds, it’s 4 pounds heavier than the Coleman. But with its large, three-way windscreen, a hookup for a big (5 to 20 pounds) propane bottle, and 40,000-BTU output (double that of the Coleman), the Mountaineer lets you do more in the way of high-heat cooking than our other picks. For instance, you can sear a steak or blister peppers. And the controls allow for some impressive subtlety. But managing them does require a certain amount of finesse—with a stove this powerful, it’s easier to burn your food than to keep the heat low. 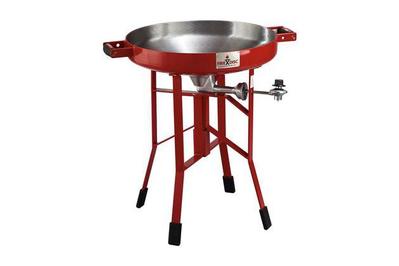 If you often cook for a crowd, the FireDisc’s paella-like pan is ideal for making big meals. This stove is great for those who don’t want to tote extra cookware.

Though you probably won’t be hauling the Original FireDisc Portable Propane Cooker too far from your car (in total it weighs 55 pounds, the most of any stove we tested), it does break down into three fairly easy-to-carry components: two supporting trusses and one large pan. It has the simplicity and strength of something you’d expect to last a lifetime (with the proper care). In other words, the FireDisc should last a lot longer than its five-year limited warranty. It has a single-pan design (think of a wok or a paella pan, though the FireDisc is most closely related to a Mexican discada). So you can do away with the usual pots, pans, and sear plates—and make your cooking station a lot less complicated. Cooking on the FireDisc is akin to using a large griddle plate: You can make a single large-pot meal, like a stew or fry-up, or set up zones for different foods, as you might when preparing fajitas. Either way, to some extent you’re inevitably cooking everything together, and heat controls are limited.